Time for some pie!

…Or rather, time for pie to be transformed into something beautiful. Something gorgeously well-ordered. What on Earth am I talking about?? For a hint, here is a definition:

And, the exciting transformation:

Organizing this type is something that has taken me several years. Some of it is fairly worn, but it is all brass, and thus ideal for the hot stamping known in bookbinding as tooling, or finishing. Countless hours have been spent in sorting the various sizes and styles shown here, and even then, about half of the entire box in the bottom right of this picture comprises letters with no match. The other half of that box is punctuation which probably belongs in one of the other boxes, but I’ll have to leave that last part of this project for another day.

Sometimes it is difficult for me to explain to my clients why I cannot stamp their name in their chosen font on the book cover I make for them without having a die made. Perhaps the photo above might explain a little bit about the process of titling a book cover. As you can see, the tiny brass letters are fixed in size and shape. To a bookbinder, the meaning of the word ‘font’ refers to a set of these pieces of brass; it is not something that you highlight with your mouse and change from a dropdown menu. Very unfortunate, to some extent, since it does not allow for creative layout possibilites which respond to the particular needs of a specific project. For that, one must contract to have a die made, usually from magnesium, or for high volume production jobs, from copper. There are environmental risks involved in this process that the city of San Francisco has deemed unsafe; thus there are no companies that perform this service here. And once it is made into a stamping die, the magnesium is a health hazard of sorts as well– it is extremely inflammable, so for a bookbinder to store old dies is dangerous. G-d forbid any bindery with magnesium dies in storage should catch fire, for it would explode to high heaven. In a fire, brass type might melt. Which would be sad. But not dangerous.

Brass type is often the preferred choice for me because it also reduces waste; it is nearly infinitely reusable. A magnesium die is generally used only once, at the time of a single project. Of course, having a magnesium die made can be more fun because the possibilites are nearly limitless. Brass type lends a traditional, cultured appearance, where making a die allows more creative control. Here’s an example of a project I worked on which required a die.

Dies are best made with type and line art– very little shading or solid blocks of color will come out well with a die. Theoretically it is possible, but for best results, line art and type are recommended.

The topic of book decoration could go on for volumes, and this is just a blog. There are lots of points of departure on my links page over on Book Island in case you’re interested.

Something I truly enjoy which most other bookbinders veer away from is Bible repair. The large family Bibles of the late nineteenth century are often unwieldy mammoth objects with heavy double-thickness boards, weak joints, and crumbling paper due to the production advances of the Industrial Revolution. Around now, 150 or so years after their production, these Bibles are widely in need of, ah, joint replacement surgery, so to speak. They are difficult to repair because of their heft, size, and fragility– never a good combination. I enjoy them, however, because they offer me the opportunity to fulfill what I feel is my purpose in being a hand bookbinder: keeping history alive, educating clients about the items they possess, and allowing clients the ability to page through a book they’ve been too scared to touch because it was damaged.

This Bible was a particular pleasure to restore because it was made prior to all the so-called advances of the late 1800’s. Instead of two laminated boards, this book had one thick one for each cover. Instead of deep blind tooling on the covers combined with carved board (which often delaminated), this one used fine gold stamping to decorate the covers. The leather used was not suffering from red rot, and probably never will, since the tannage seemed fairly stable, and the leather still fairly strong. the paper, as well, was healthy, and registered a pH of 6! Amazing. Another thing that impressed me about this book was the sewing. Tens of thin signatures all sewn in a remarkably regular way, as can be seen below. In binderies of this period, it was generally women who did the sewing, and they often sewed without pre-punching the signatures as we do today (though this book was likely sawn). I was kind of touched to see how many signatures there were to this giant behemoth, and all of them sewn perfectly regular. 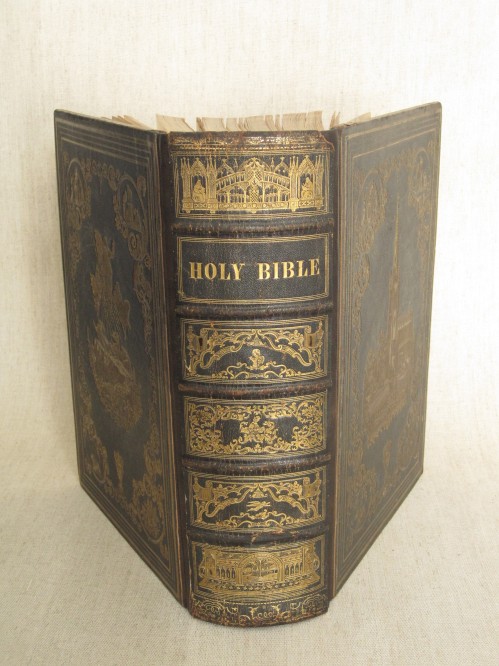