The bookbinder’s trade has evolved in a rather solitary way these days, at least in North America. It hasn’t always been such. Depending on the size and region of the shop, there would be enough workers to support a division of labor into separate departments such as folding, sewing, forwarding, finishing, paper beating, paper sizing, ploughing, and edge treatment. Binders in European seventeenth century encyclopediae and manuals show jolly shops with generally cheerful workers all doing his or her own part. (For more on those, see Mirjam Foot, Bookbinders at Work, Oak Knoll 2006.) Even as late as 1906, we see the roster of the Doves Bindery in this photo, happy together and probably fresh off one of their lunchtime croquet matches. (If you made books as finely as the Doves, one might say you’d earned your afternoon croquet.)

By comparison, this oft-published etching of Roger Payne from 1800 shows what happens when a bookbinder works alone in a garret for too long, though Payne took the status and skill level of bookbinding much farther than anyone working in the trade at the time. 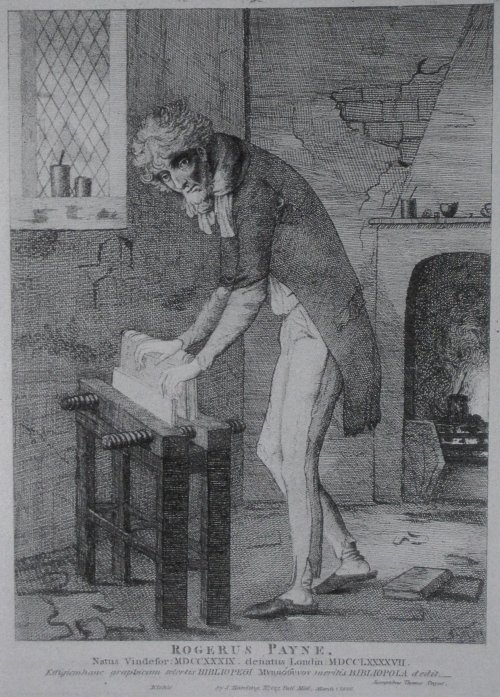 Is there some kind of line to be drawn between happy bookbinders working in concert with one another and unhappy, solitary, dark souls, hammering out reading material fit for the bookshelves of a king? I don’t think it’s quite that simple these days; however, one thing I do know is that it’s great to get together with other bookbinders and swap horror stories, tall tales of glory, and of course, just a sliver of plain old-fashioned gossip. Some might call this “shop talk”, but since no bookbinder I know works in anything similar to what is known as a “shop”, perhaps we can call it kvetching? Venting? Or just the modern bookbinding version of shop talk.

My old friend and compatriot in bookbinding from Chicago, Karen Hanmer, visited San Francisco for a few days in October to teach her brilliant way of doing things, and I was ultralucky enough to host this Famous Bookbinder while she taught here. Karen’s formal training in bookbinding is from the American Academy of Bookbinding, but my immense respect for her stems from the fact that experience is her guide, and she is constantly working and trying new techniques and binding styles. The space race of the 1950s, the early history of computers, and midwestern prairie imagery figure heavily in her work, and I must confess some envy of her quirky creative perspective. She and her husband travel by train almost everywhere they go, and they’ve taken some pretty neat trips together.

I also like Karen’s unpretentiousness, her humility about her own work, her uncompromising work ethic, and her desire to learn something from every project regardless of how well it turns out. Over the years I have seen Karen’s work evolve and her focus change and change again, and it is fascinating to me how dynamic the field of bookbinding seems when I think about the range of projects she has taken on. Typically I am not a “content guy”, as some have noted– rather more interested in technique and structure, but Karen’s creative work inspires me to devote more time and energy to design, color, and maybe even one day, content. That is one quality of a great friend– he or she likes you as you are, but will also draw you outside your comfort zone and encourage you, either literally or by example, to try new things. When we both lived in Chicago, we would show each other our worst binding mistakes, the most embarrassing boo-boos or bad design choices, and we assuaged each others’ guilty feelings as only the best friends do. Will do better next time and keep soldiering on.

While Karen was here, we didn’t have too overmuch time for hanging out– she taught classes over four full days, mostly to full groups of ten students. It is exhausting to be on stage all that time for anyone, and I also had to work each day she was here except Saturday.  We would eat dinner together and pretty much pass out just after! On her last day here in San Francisco, we went to see the mural by Diego Rivera at City College. It’s something I’ve always meant to do, but never devoted the time to doing it, and it was amazing. It’s remarkable that the mural is open to the public, viewable anytime the theater is open (11-4 Tuesday through Saturday). There was a student docent (history major, no less!) sitting near the mural to answer questions about it, and he was really helpful and informative.

Thanks for visiting, Karen! I’ll miss you! And thanks to Hand Bookbinders of California and the San Francisco Center for the Book for arranging for Karen to teach here. 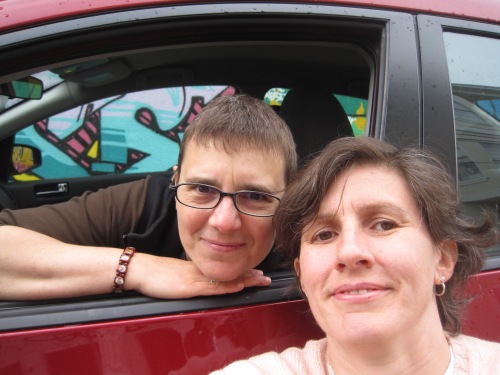 Filed under Around, About, and Through, Classes I've taught